THATCHER AND SAWYER AND THE TARGET 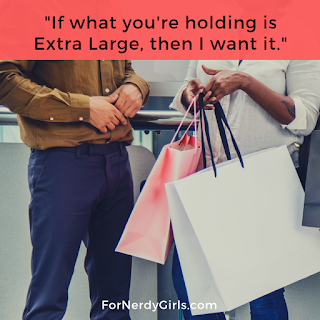 “You don't need one that big.”


She plucked the admiral blue t-shirt off the Graphic Tees display shelf. “I do, because it might shrink.”

He checked the tagless imprint near the collar. “It's a 50/50 poly-cotton blend. Shrink proof.”


She tugged the item away from him and closer to her red, plastic shopping car. “That’s what it says, but do you know for reals? If I get a Large, and I wash it, and then it’s too small, are you going to buy me a new shirt?”

“I’m willing to learn. What would you like to teach me?”

Clothing still in hand, Thatcher held back her amusement. “I love television. Hence, I’m buying this Square One TV shirt.”

He held up his finger in protest. “We don’t know who’s buying this particular piece of merchandise yet, because it’s the only Extra Large left.”

Other guests of the department store continued shopping around them, oblivious to their conversation.

“I’m holding the shirt,” she noted, “and possession is nine-tenths of the law, so…”

“So I should let you have it, even though I am also a television fan who enjoys classic educational entertainment?”

“What if,” she proposed, “I help you find a cooler retro graphic tee in your size, that makes you feel even more nostalgic about your childhood?”

He found a nearby employee stepladder, pushed it to their section, and took a seat. “Let’s see them.”

“I’m not your stylist. Come here.” She stuffed the blue top in her car underneath the mini soda cans, boxes of tampons, and package of toilet paper with a white angel baby on the side. Then she placed her hand on her fellow shopper’s back and guided him to the folded t-shirt edifice. “There are,” she counted the rows, “over 50 choices, but we’re looking for a specific size. I’ll take this side. You take the backside, and grab one Extra Large of each style. Then bring them over here, and we’ll select the best one.”

“Thatcher.” She shook his hand. “What’s your name?”

“Sawyer. Nice to meet you.”

Thatcher started sifting through the neat piles, and Sawyer did the same on his side. Spotting the rectangular size stickers, Thatcher easily procured her contenders. “Are you from here?”

“Los Angeles? Not originally. Why do you ask?”

“Because I grew up in St. Thomas.”

Sawyer replied, “I’m from Trinidad. I still have the accent, yeah? But you don’t sound like the people I’ve met from the Virgin Islands.”

“I have a generic American accent. Like the people on TV.”

“A little Southern though.” Sawyer had a tougher time locating the XLs. “Like Blanche Devereaux.”

“In my formative years, I spent too many summers with my cousins in Atlanta. Or not enough. Either, or.” Thatcher set her haul on the ladder and moved the cart so she could check on Sawyer’s progress. “How are you doing over here?”

“I found these two?” Sawyer held up one beer shirt and one nuts shirt.

“Okay, step back.” In less than a minute, Thatcher tore through the levels with minimal product disturbance and found 12 options. She cleared a space on the carpet between the rack so they could sit down and sort through their score of items.

“You’re good at this.” Sawyer took his place across from here, cross-legged.

Thatcher assessed each selection one at a time. “No. No. No.”

“Nirvana?” Thatcher turned up her nose.

“Not a fan? Prefer Guns N’ Roses?” He held up a black and yellow shirt.

“More like Spice Girls, but this is the Men’s section, so boys only,” she replied in an old man voice.

“Boyz II Men?” Sawyer showed her a top with the three remaining members on front.

“It’s odd having a person’s face on your stomach.” She folded the rejects and transferred them to their previous places.

“I guess you wouldn’t be interested in the Robin Hood either.”

Thatcher glanced at the green material. “Prince of Thieves or Men in Tights?”

Thatcher stretched her arm for the shirt, but she wasn’t quick enough for Sawyer, who held it out of her reach.

“Now I have something you want?” His arm stayed in the air.

“If what you’re holding is extra large, then yes, I want it.”

“Shall we make a trade?”

Thatcher checked the rest of the pile before giving an answer.

Sawyer read the price tag. “It’s on Clearance, and the only other size I saw was a Small, so I doubt there are any more left.”

Thatcher stood up to retrieve her Square One shirt. “Show me yours first.”

“I’m a nice guy. From Trinidad,” he said. “We’re practically neighbors. The Caribbean’s a small place. We might be related.”

Thatcher remained standing. She held her hand out.

Sawyer clutched her hand and pulled himself up. “Thanks. I needed a bit of help.”

“No, the shirt,” Thatcher laughed.

She examined the merchandise. “Right size. The design includes most of my favorite characters, except no Clucky or Sir Hiss.”

“I liked the vultures.”

“Fitting.” Thatcher gave Sawyer what he was looking for. “Here you go.”

He put the top in his small basket. “You’re a formidable opponent.” He bent down to clean up their mess.

“I like negotiating, and I like getting what I want, even if it’s something different than what I thought I wanted in the first place.” She tried to help with the go backs, but Sawyer shooed her away.

“And you put many of them in the correct location.”

“Good enough.” He shifted his attention back to Thatcher, studying her appreciatively.

Sawyer slipped into a coughing fit.

“I’m kidding,” Thatcher said. “Though I can see how this fox has led other viewers down that path. Do you need some water?”

“The truth is, it’s one of the last movies I saw with my grandfather when I was little, before he died. And it still holds up. The Jungle Book does not. Neither does Dumbo. Or The Aristocats. Robin Hood matches my philosophies: use your talent to serve the less fortunate. Why Square One?”

“Unfortunately, I can’t compete with your story. My grandparents are all still alive on the island. I haven’t thought about my philosophy on life. I like the show because I like math.”

“I like math!” Thatcher navigated her cart of the sectional carpet and onto the white vinyl aisle.

Sawyer grabbed his basket and followed along. “You do?”

“When I get home, I may do a few pages of logic problems in my puzzle books.”

“Is that the extent of your Saturday plans after you check out at the front?”

“Not entirely. I was also going to buy a box of overpriced desserts from Cupcake Party, if the line’s not out the door, and eat them while I watch Jurassic Park for the 20th time.”

Thatcher looked directly at him. “Intelligent. Handsome. Sculpted.” She stopped her cart at an electronics display. “Annoyingly self-assured in a way only men are allowed to be.”

Sawyer watched her drop a package of D batteries on top of her toilet paper. “He correctly predicted that the outcome was unpredictable.”

“And he barely escaped with his life.” Thatcher continued pushing. “What are you doing with the rest of your Saturday?”

Sawyer kept up with her. “You tell me.”

[Which Disney animated characters are you attracted to?
Did you read the whole story? Congratulations!
Tell a Friend. 🙆🏾]
Posted by Mr. J at 3:01 AM